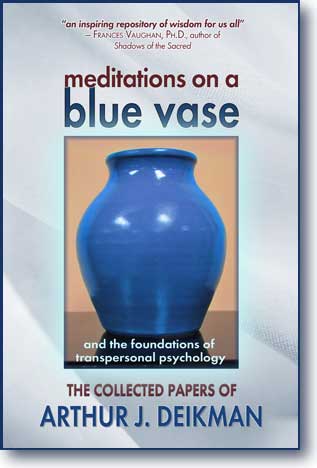 Fearless Books is pleased to announce the publication of a landmark collection of papers and articles authored by the late Arthur Deikman M.D., a pioneering psychiatrist who conducted some of the earliest studies of meditation and challenged the medical establishment's reliance on drug treatment for people diagnosed with depression, psychosis, and schizophrenia. A clinical professor of psychiatry at the University of San Francisco for two decades and a courageously independent researcher, Dr. Deikman led the way in original investigations into such topics as:

What is the difference between psychosis and mystical states of consciousness? What do the great esoteric traditions have to tell us about the farthest reaches of the human mind? How can we recognize cult behavior, whether it occurs in isolated groups or the culture at large? What are the most sensible and effective approaches to meditation?

These questions and many more are answered in this profound and exciting anthology by a founding researcher in the field now known as transpersonal psychology. This is the rare book that provides both an education and a transformative experience for readers interested in the history of open-mindedness. Contents include:

A Functional Approach to Mysticism • The Empathic Ward

The Overestimation of the Mystical Experience

Treating Former Members of a Cult • The Meaning of Everything

ARTHUR J. DEIKMAN M.D. (1929-2013) studied physics at Harvard University before training as a psychiatrist, inaugurating a career as a pioneer investigator of mystical states from the 1950s onward. He developed a humane form of psychotherapy for patients with psychosis, and was one of the earliest investigators to discriminate between pathological and genuinely advanced mystical states of consciousness. Dr. Deikman served as a clinical professor of psychiatry at the University of San Francisco. Besides the selection of papers published in Meditations on a Blue Vase, he authored The Observing Self: Mysticism and Psychotherapy and The Wrong Way Home: Uncovering the Patterns of Cult Behavior in American Society.
_______________________

"Arthur Deikman is one of the pioneers of consciousness research and this collection shows the impressive breadth and depth of his many contributions." — Roger Walsh, M.D., PhD., author of Essential Spirituality

"Arthur Deikman's innovative, scholarly contributions to the study of consciousness are an inspiring repository of wisdom for us all." — Frances Vaughan, Ph.D., author of Shadows of the Sacred

"Arthur Deikman led the way in meditation research, helping make such study respectable.... Arthur was born with the gift of clarity and he had an extraordinary instinct for the good. What a friend he was! What a boon to the wide world!" — Michael Murphy, co-founder of the Esalen Institute

from the Foreword by Charles T. Tart, Ph.D:

Arthur Deikman's interests were very wide-ranging. His interest in the nature of consciousness, for example, not only included the mystic and altered states end of the spectrum, but the practical aspects of psychotherapy. One of his most interesting projects, reported on in several articles in this collection, is about his attempts to reform the treatment regime of a major psychiatric hospital to undertake practical psychological work with patients — which meant respecting them as people, rather than just giving them drugs and locking them away....

This was going against the establishment, which was rather overly charmed with the possibilities of drug treatment or psychiatric disorders. Indeed, some people would say the psychiatric establishment is still quite overly charmed with medication. One of the frustrations of Deikman's career was that it took many years to get his reports about this daring work published in orthodox journals.

He was also quite interested in what modern science could contribute to understanding consciousness. I remember a few years ago when he devoted a year to deeply reading in the literature of modern physics, to see how quantum approaches and the new physics could cast some light on the workings of consciousness. We had a number of discussions about this, but despite some of my early initial training being in the physical sciences, he was way ahead of me in his understanding. Not that he was a narrow-minded physical reductionist who expected that the physical sciences would eventually explain away consciousness as nothing but electrochemical actions in the brain. He grasped that there is a physical brain involved but not totally identical with consciousness, and understanding its workings is part of a full understanding of the nature of the human mind.

There are other dimensions of Deikman's understanding that you will encounter in the articles in this book, and I will let them speak for themselves. This gentle man, my friend, always impressed and stimulated me by the depth of his curiosity, comprehension, and clarity, and I think you will be too.

Now, we will relate some examples of trust building and power sharing that, for political reasons, we felt unable to publish previously because they seemed too radical. As described in our previous articles, patient-personnel meetings of the entire ward were characterized increasingly by active patient initiatives to the point that patients began to run some of the meetings. Occasionally, they chose to reverse patient and staff roles and a kind of ironic humor emerged when patients mimicked staff with consequent laughter all around; the patients came to sober realizations as they came to appreciate the difficult challenges of being staff. They concluded that they preferred their easier roles as patients. These temporary role reversals engendered consid­erable empathy, staff for patients and patients for staff, with a consequent sense of mutual responsibility for one another. What we did not report in our previous articles were the more extreme instances of this growing dynamic.

In October, about eleven weeks into the full operation of the ward, the patients decided to hold a Halloween party for patients and staff, but did not reveal the particulars until the party was underway. It turned out that what the patients had planned was a Salem witch trial during which each staff member was accused of a therapeutic crime and sentenced to have a hand or foot immersed in ice water for a length of time appropriate to the gravity of their misdeed. Every staff member was accused, convicted, and sentenced for their crimes. For example, with suitable irony, Deikman was accused and convicted of prescribing too many drugs.

Next came a more radical request: the patients wanted the keys to the padded, sound­proofed isolation room, into which they would herd and seclude all of the staff, and then retain the keys for an unspecified period of time. There was remarkably little hesitation by staff or patients, although patients were nervous about the implicit responsibility, and staff knew it would have been impossible for them to be heard crying out to other hospital personnel for help; some staff were concerned they might become the laughing stock if the patients did not unlock the door and release us. After about 20 minutes of being crowded together in the isolation room, the patients let the staff out for good behavior. (The isolation room, literally a padded cell, was never used, before or after Halloween, for involuntary patient isolation; any patient who wished to use it for the sake of peace and quiet was allowed to, but none ever did.)...

We turn now to some specific challenges to our program, starting with the example of a woman who swallowed sharp objects. We found that a psychiatric resident had been covertly administering drugs to her without that stopping her behavior. After learning of the covert medicating, stopping that, and not knowing how to stop her from harming herself, the solution came from patients who, knowing of our concern, decided to intervene. They gathered at her bedside one evening and directly expressed their wish to help her, asking how they could do so. She responded by Suggesting that they simply tell her to stop, which they did; she stopped and did not resume self-destructive behavior, even after dis­charge when she was evaluated more than a year later. Aside from her potentially suicidal behavior and that of many others, during the eleven months of the ward program, there were no suicides or suicide attempts.

Staff attitudes and cohesion integral to the ward milieu also had a strong immediate influence on even newly admitted patients' self-destructive behavior. For example, Whitaker did an intake interview one morning with a severely anorexic woman with whom forced feeding would have been considered. The ward staff sat on both sides of the room and the patient and Whitaker faced one another in the middle. Whitaker told the patient that he understood she was not eating and then said that he appreciated that because the hospital had severe budgetary problems and that she could help reduce food costs. Furthermore, he added, the hospital food was of poor quality anyway so she would not be missing anything. She then looked on each side of the room at staff and asked "Is this man crazy?' Staff replied soberly that they had wondered about that but did not know and that she would have to decide for herself. The ward lunch hour followed the interview; subsequently, staff informed Whitaker that she had not only eaten the main course but also three desserts. She also continued to eat during her ward stay, was discharged, and about two years later greeted Whitaker on the street, appearing slim but not anorexic, and thanked him....