Besides helping many writers improve their manuscripts and publish independently, Fearless Literary develops a limited number of projects for direct representation to publishers. We currently specialize in the nonfiction fields of contemporary spirituality, human potential, health & fitness, memoir, and the arts, but have begun to develop some fiction projects. Following are some of the promising projects now in progress at various stages of development. Rights inquiries from established publishers are welcome. To keep up with all author news from Fearless Literary, join the Fearless Books mailing list.

CURRENTLY IN DEVELOPMENT OR REPRESENTATION

CURRENTLY IN REPRESENTATION: As the consequences of climate change make themselves known in record heat waves, catastrophic wildfires, and “storms of the century” that now happen every few years, a growing number of people are finally awakening to the worldwide ecological crisis induced by human activities. In RECLAIMING OUR NATURE: Practices for Reconnecting with the Earth and Each Other, ecotherapist Justin Pegnataro offers a ground-level prescription for restoring a healthy relationship between humanity and nature. With an academic background in biology and anthropology and a Masters degree and license in Mental Health Counseling, Justin worked as an environmental educator for the Yale School of Forestry and directed a wilderness school for ten years before founding his private ecotherapy practice. RECLAIMING is not a simplistic "back to nature" or wilderness guide, but an articulate program of philosophy and specific practices for "following the pain of the earth" to a healing reconnection with our humanity-in-nature. For some specifics, see his "Living with a Wild Heart" vlog. 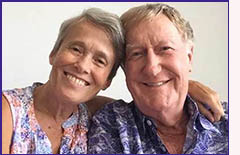 CURRENTLY IN REPRESENTATION: Dr. Annie & John Campbell are the authors of INNOCENT SEX: A Path from Guilt to Freedom summarizing their work as spiritual sex educators for lovers of all ages. Annie is an accomplished neuropsychologist with a PhD in neuroscience and three books on her resume, including the 1998 title Brain Sex, which is still in print and English and Spanish. She also worked for the BBC in documentary production, subsequently forming her own independent film company Quality Time TV, founded and run with her late husband Bill Moir. John had a successful and sometimes notorious career as a merchant ship captain and oil industry entrepreneur before "retiring" to become a therapeutic counsellor, NLP practitioner, and hynotherapist. John & Annie met in 2013 and cite A Course in Miracles as the central inspiration of their teaching. Hear them tell the story of their meeting here and visit their website at www.innocentsex.org.

CURRENTLY IN REPRESENTATION: Fearless Literary is pleased to announce signing native South Indian writer and feminist activist Sangeetha Shinde for the editorial development and representation of her nonfiction narrative THE THOUSAND LIGHTS OF CHENNAI, based on the true-life story of a slum-dweller who was bought and sold as a domestic slave. She has published four books: Amman: Story; A Moral Murder and Other Tales From The Blue Hills; The Book of Anglo Indian Tales; and most recently, The Naked Indian Woman. Her books have received excellent reviews in Femina, The Indian Express, The Week, The Hindu, BBC and The Tribune, UK. She was listed as number six on The Landmark List of top twenty new writers to look out for. Sangeetha was a highly read contributor to the the internationally acclaimed Teabox blog. Her 2017 manifesto 'I am an Indian woman' went viral on the Internet and was recently published by Vidura, the in-house magazine of The Press Institute of India, and by the online magazine Mind Journal.

CURRENTLY IN DEVELOPMENT: Gary R. Renard, the best-selling author of The Disappearance of the Universe, Your Immortal Reality, Love Has Forgotten No One, and The Lifetimes When Jesus and Buddha Knew Each Other, was born on the historic North Shore of Massachusetts. He became a successful professional guitar player, but during the harmonic convergence of 1987, he heard a calling and began to take his life in a different direction. At the beginning of the 1990s, he moved to Maine, where he underwent a powerful spiritual awakening. As instructed, he slowly and carefully wrote Disappearance over a period of nine years. Originally published by Fearless Books in 2003, the title was an immediate small-press success and was licensed to Hay House in 2005, going on to sell over 200,000 copies in world English and a number of foreign editions. Fearless Literary is pleased to welcome Gary "back home" by developing and representing his fifth title, currently in progress. Publisher inquiries are invited. Watch an interview with Gary and his wife Cindy Lora-Renard on a Fearless Hour "Extra".

CURRENTLY IN DEVELOPMENT: Fearless Literary is working with veteran indie musician David Knopfler, founder of the 70s hit band Dire Straits, to develop a book of advice and memoir entitled HIGHER STRAITS: An Indie Musician's Advice for Keeping It Together and Getting Some Satisfaction. The book will offer David's experienced wisdom on the independent music biz for up-and-coming musicians, based on his early experience in Dire Straits and his subsequent pursuit of a self-produced musical career. "If you feel driven and compelled to make your work and to be fiercely original and have something unique to say, in a compelling way, then chances are the helpers will be there for you... the doors will open some, the ice will crack. You just have to be sufficiently driven not to give up, even when you’re feeling about as popular as Vincent Van Gogh did when the good people of Arles sent him packing." For more preview, read the Fearless "Higher Straits" interview with David here.

CURRENTLY IN REPRESENTATION:The author of the award-winning memoir A SONG FOR LOST ANGELS: How Daddy and Papa Fought to Save Their Family (originally published by Fearless Books) Kevin Thaddeus Fisher-Paulson lives with his husband Brian, their two sons, and their four rescue dogs in San Francisco. When not writing, he serves as Chief Deputy of the San Francisco Sheriff’s Department. He earned a degree in American Studies from the University of Notre Dame in 1980 and subsequently studied writing with Dorothy Allison, Jessica Hagedorn and Steve Abbott. Kevin is a weekly columnist for the San Francisco Chronicle, contributes irregularly to the National Public Radio Perspective Series, and blogs for Gays with Kids. Fearless Literary assisted in the independent launch of the first collection of Kevin's Chronicle columns, entitled HOW WE KEEP SPINNING...! Fearless Literary is currently representing Kevin's guide to "creativity under pressure" entitled THROW IN THE ACCORDION! Publisher inquiries are invited.