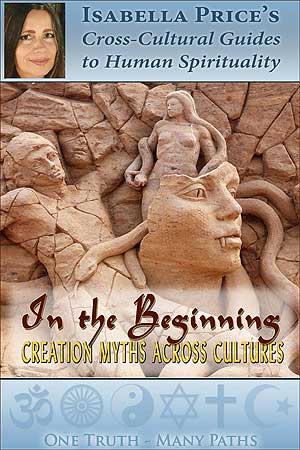 Throughout the ages we’ve asked: What is the nature of the universe? How did it originate? Where do we humans come from and what is our place in this universe? Both science and religion provide some answers to these fundamental questions that continue to haunt us.

In the Beginning: Creation Myths Across Cultures takes you on a journey through time and introduces you to a fascinating and broad array of cosmologies and creation mythologies. From the creative processes that were at work billions of years ago when the first nuclei of our solar system were formed, to the emergence of the human species on planet Earth, in every culture we humans have invented myriad of ways in which our primal creativity can be accessed for the collective journey of humankind.

The Hindu Vision of an Ever-New Yet Eternal Cosmos
Hindu cosmology, with its understanding of infinite space and time, encompasses a broad and rich array of narratives about the origins of live, creation, and the process of evolution… The Hindu concept of time embraces literally billions and even trillions of years that constitute the yugas, vast cosmic time cycles through which the evolutionary process runs. For millennia, India’s sages and seers have been contemplating the existence of galaxies and universes that were said to be as numerous as the grains of sand by the Ganges… Many ancient Hindu astronomical observations and mathematical calculations are astonishingly sophisticated and accurate…

Woman – Not Made in God’s Image
Interestingly, the creation of the sexes differs considerably in the two creation accounts of Genesis: While Genesis 1 explicitly states that first man and first woman were created simultaneously and hence equally made in the image of God, Genesis 2 introduces the narrative of Eve being fashioned from a relatively insignificant body part of Adam. This second account is highly problematic as it inverts the biological birth process, attributing the function of the live-giver to the male. Woman becomes the “second sex;” she has not been created in God’s image… Not surprisingly, this second narrative of Genesis had historical implications of truly biblical proportions…

Native American Creation Myths of First Man and First Woman
The concept of creation by thought and the power of the word is characteristic of the Winnebago creation narrative as well. Their creator, Earthmaker, conceives of his creation in his mind. He desires to create a being “in his likeness” and creates by uttering the words of power. Native Americans attribute great power to the spoken word. In fact, to utter the name of something is to call it forth. The creation of humans as imaged by the Winnebago bears a striking resemblance to Genesis and also evokes another mythic narrative recounting how the ancient Egyptian god Ptah created humans on a potter’s wheel… Yet there are also considerable differences between the Winnebago creation account and Genesis…

While each Native American tribe has its own account of how first man and first woman emerged on Earth, the narrative of the Oglala Lakota is a particularly interesting example. After creating the animal people, Mother Earth “took of herself and created bone and covered it with flesh”… Remarkably, in the Oglala Lakota narrative it is first woman who is created first and complete while first man is created second and considered to be one step short of completion…

ORDER NOW FROM THESE DIGITAL RETAILERS:

LEARN MORE AT THE ONE TRUTH, MANY PATHS WEBSITE